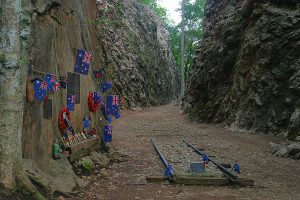 A national commemorative service to mark the 75th anniversary of Australian work on Hellfire Pass and the completion of the Thai–Burma Railway will be held on Tuesday, 16 October 2018 at the Australian Ex-Prisoners of War Memorial, Ballarat.

For Australians, the most well-known of many notorious sites along the Thai–Burma railway was Hellfire Pass.  Named for both the brutal conditions under which prisoners worked and the fact that at night the scene was lit by carbide lights, bamboo fires and hessian wicks in containers full of diesel oil, Hellfire Pass, remarked one former prisoner, ‘looked like a scene out of Dante’s inferno’. Located at Konyu, Thailand, Hellfire Pass consisted of two cuttings; the first measured 460-metres long by 7.6-metres deep, the second was 73-metres long and 24-metres deep. The work here, which involved drilling, blasting and digging through solid rock, was as dangerous as any on the railway.

Work began at Hellfire Pass in late April 1943. At the beginning, prisoners had to move one square metre of earth per day; within two days this was doubled and after a week increased to three square metres. Survivors of the initial draft of 380 men sent to the pass were joined in June by more prisoners and compelled to work even harder. Southeast Asian labourers, including Cambodian jack-hammer operators, also worked on this section of the track. Shifts lasted 18 hours a day, a regimen that continued until the cutting was complete after some six weeks. Work on the railway continued until 16 October 1943 when the two ends of the track were joined. More than 2,800 Australians are believed to have died working on the Thai-Burma Railway, some 700 of them at Hellfire Pass.