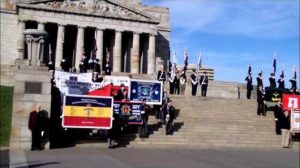 A Reserve Forces Day Parade and Ceremonial Service with the Villers Bretonneux, Le Hamel and Amiens Centenary theme will be held on at the Shrine of Remembrance Melbourne.

Marchers to report to Government House Drive at 0930 hrs for Association group photographs prior to the FINAL  Reserve Forces Day Parade.

Refreshments will be served at the conclusion of The Parade and Ceremonial Service at 1145 hrs.