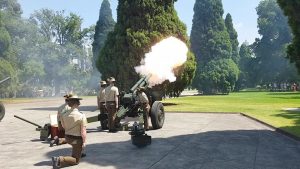 A 21 Gun Salute on the Lower Forecourt marks the Official Birthday of Her Majesty Queen Elizabeth II, the Head of State.  Although her actual birthday is 21 April, there is an Official Birthday in early June to coincide with finer weather that benefits the outdoor ceremonies. In Victoria this is held on the second Saturday in June.

A 21 Gun Salute is a traditional salute firing blanks from an artillery piece or cannon to acknowledge special Royal occasions within the United Kingdom and Commonwealth.  This will be undertaken by members from 2/10 Bty,  9 Regt, RAA.